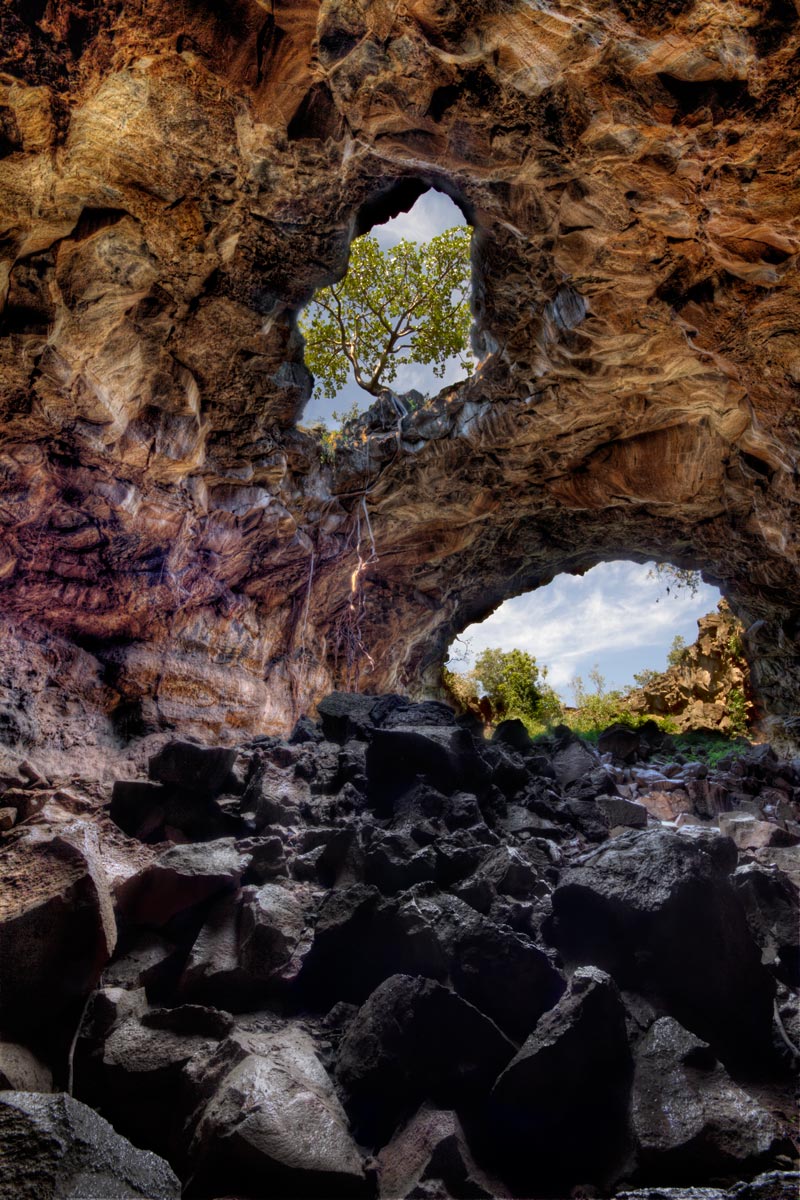 For years I have been searching for the the right HDR program, the right combination of sliders, the perfect preset that would work magic with my bracketed RAW captures and spit out an image that matched what I had in mind when I was setting up my tripod. But every time the final image failed to live up to my expectations. The detail was fabulous, the colours were beautiful, the tones being pulled from deep shadows and blown out highlights were incredible. But my images never seemed to work as a whole.

It turns out that was the problem. I was expecting everything to be ‘right’ in just one step. Once I saw the Photoshop layer stacks produced by some of the masters of HDR like Trey Ratcliff and Elia Locardi I realized that tone mapping was just the beginning. What follows is a step by step example of how to build an HDR layer stack in Photoshop.

Nothing will push the limits of high dynamic range photography like shooting from the inside of a lava chute on the side of a volcano out into the equatorial sunshine at 8,000 feet above sea level. The sky was about 12 stops brighter than the rocks in the cave. I took three manually bracketed exposures at f/16, ISO 100, Canon EOS 7d, 10mm lens. 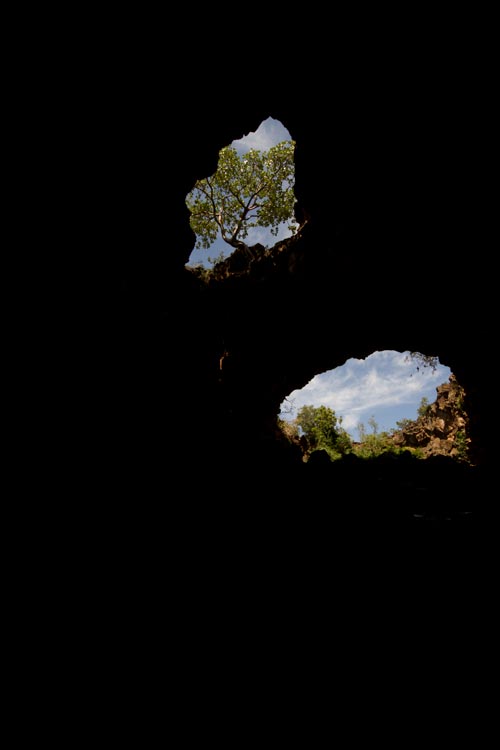 Exposure metered off the sky: 1/50s 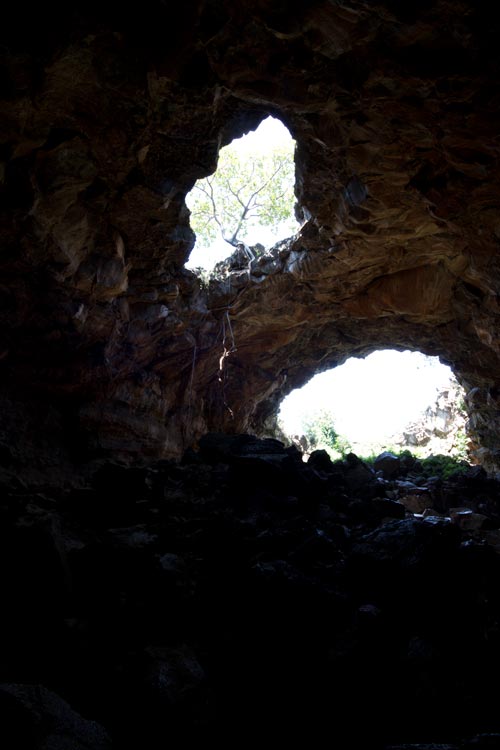 Exposure for the areas around the cave openings: 0.3s 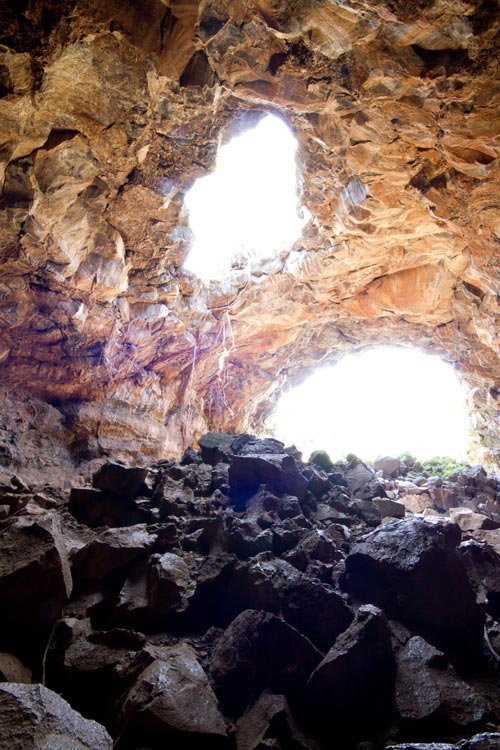 Exposure for the cave interior: 1.3s 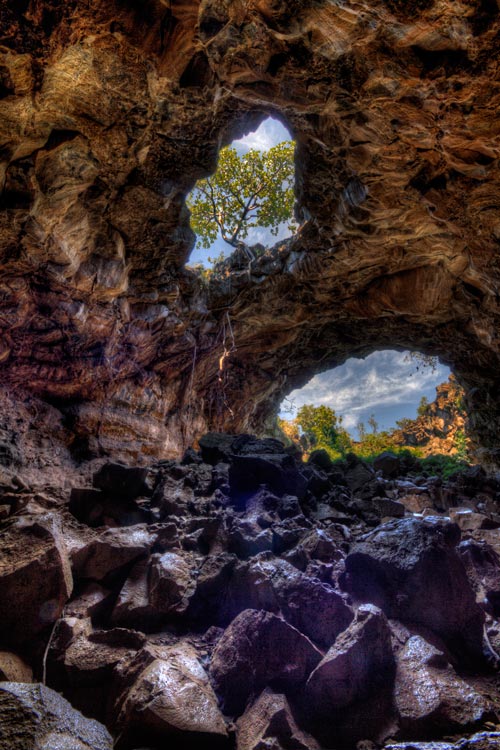 The best result I could achieve with Photomatix looked like this.

This is interesting, but certainly nothing like what I saw when I was there. The interior walls look pretty good. The rocks in the foreground seem good except for the erie purple lens flare running down the middle. The area outside the cave is where the whole thing falls apart. Bizarre blue skies that don’t quite extend all the way to the edge of the cave openings, garish rocks, and radiation green plants make me want to stay inside the cave and never leave. Obviously this tone-mapped image needs some help from Photoshop.

Here is how I built up the layer stack in Photoshop (starting from the bottom and working upwards).

So, that’s it. Noise in the sky was no longer an issue because that exposure was metered off the sky in the first place. Noise in the shadows was pushed into darkness by levels and desaturation adjustment layers. The rest of the cave interior is so textured that noise is hidden. Sharpening does not seem to be required.

After many failed attempts to process these RAW files over the year since I captured them, I am finally happy with the outcome. Please let me know what you think. After all, we are all fellow pilgrims on this quest to capture extreme light.

An Adobe Certified Expert in Photoshop who loves to see what can be drawn out of a RAW file.
View all posts by Mike →
This entry was posted in HDR, image editing, photography, Photoshop, technique and tagged HDR, photoshop, tutorial. Bookmark the permalink.