Yesterday I went for an “African Photo Safari’ with two of the 13 year old boys from our dorm. Now, in reality we just walked around the guard trail that encircles our campus. But, it was in Africa, and we did take 240 pictures… of rocks. I was seeking interesting textures to blend with animal image from my real African photo safaris. The boys were not really impressed, but I got some great textures to work with.

This image of a zebra herd standing at the top of a hill seemed to have all the ingredients of an interesting image, but still lacked the impact I was looking for. I was drawn to this herd of Zebra for two reasons. First, they were on the top of a hill with nothing in the background behind them, and, secondly, they were all facing the same way. Usually when you approach a herd of Zebra you are presented with a large proportion of zebra behinds. In this case the reason they were all facing towards me is that we parked next to a bush under which two large male lions were dozing. 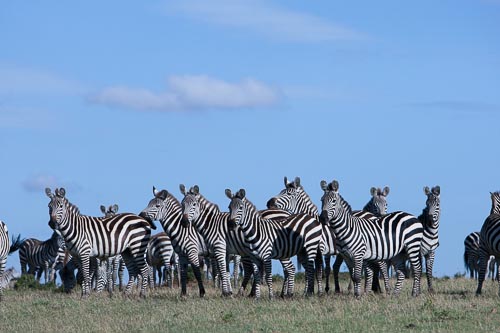 I didn’t like the way the colour image looked, and was pretty sure a black and white version would work better.  Here is the conversion to black and white using Nik Silver Efex Pro 2. 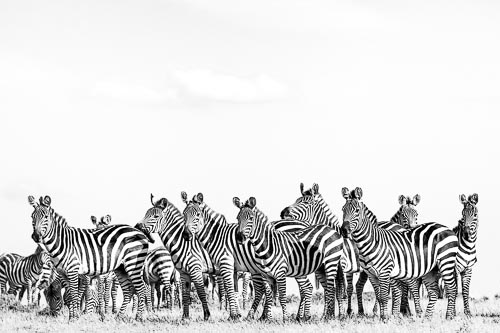 I liked the simplicity of this image. Because the zebra were at the top of a hill there was nothing distracting in the background. However, I still felt it was lacking something, so I started searching for an appropriate texture to add to the background. On the stone path near my house I found a stone I thought might work.

Opening both the black and white zebra image and the stone image in Photoshop I changed the blend mode of the zebra layer to multiply. I liked the result right away, but found that the zebra were getting lost in the texture of the stone. That’s when I started slowing masking out the stone under the zebras, especially around the faces. I used a very soft brush with the opacity reduced to only 15%.

So here again is the final rendition.

Let me know what you think.

An Adobe Certified Expert in Photoshop who loves to see what can be drawn out of a RAW file.
View all posts by Mike →
This entry was posted in image editing, photography, Photoshop, Silver Efex Pro, technique and tagged photography, photoshop, safari, Silver Efex, texture blend, tutorial. Bookmark the permalink.